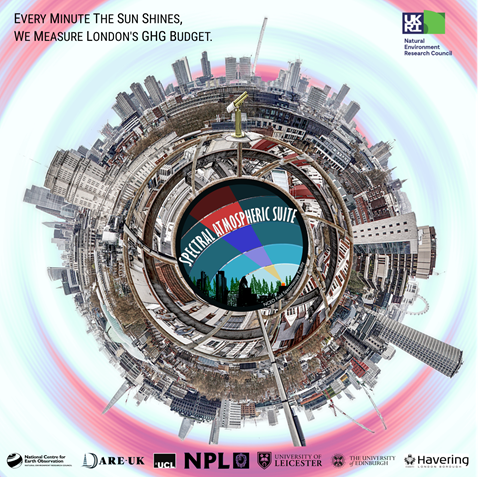 With COP26 swiftly approaching, and the eyes of the world firmly on Glasgow, the climate emergency is at the forefront of the public mind. We know that human emissions of the greenhouse gases (GHGs) CO2 and CH4 (besides the other trace gases CO and N2O) are now directly influencing our climate, but knowing where and how we emit GHGs can give us a better understanding of how we reduce those emissions.

One of those key areas where GHG emissions occur are the cities which we live in. While we know that such urban areas account for over 70% of global CO2 emissions, as well as accounting for a large fraction of CH4 emissions, we still lack understanding about the overall flows of carbon in an out of urban areas. What are the dominant urban sources, and can we characterise the sinks of carbon in urban areas? How important are biogenic processes in urban GHG emissions, and can we disentangle them from the urban anthropogenic sources? And what of satellite measurements of GHGs -- how comparable are they to ground based measurements? Finally, we should not forget that the climate emergency is also a public health emergency, and that GHG emissions are also interwoven with emissions of other trace gases and particulate matter which can directly harm human health. How linked, then, are these two strands, and can we help resolve both issues concurrently?

Clearly, if we wish to address climate change, we need to design policies that tackle urban emissions, and good, effective policy will rest on datasets which look into the questions outlined above. Consequently, there is an urgent requirement for ground based instrumentation capable of measuring GHGs at high temporal resolution within urban areas. The NERC Field Spectroscopy Facility's new Spectral Atmospheric Suite is designed for such a purpose.

Establishment of the Spectral Atmospheric Suite

Established with funding from NERC in April 2019, the Spectral Atmospheric Suite consists of three instrument "nodes", each of which consists of spectroscopic instruments capable of high temporal resolution measurements of GHGs, aerosols and other trace gases. A Fourier transform infrared (FTIR) spectrometer (the EM27/SUN from Bruker GmbH) measures column densities of the GHGs CO2, CH4 and CO, while a 2D MAX-DOAS (differential optical absorption spectrometer) (the 2D SkySpec from AirYX-Enviro Technology Services) measures the vertical column densities of gases such as NO2, SO2 and HONO. 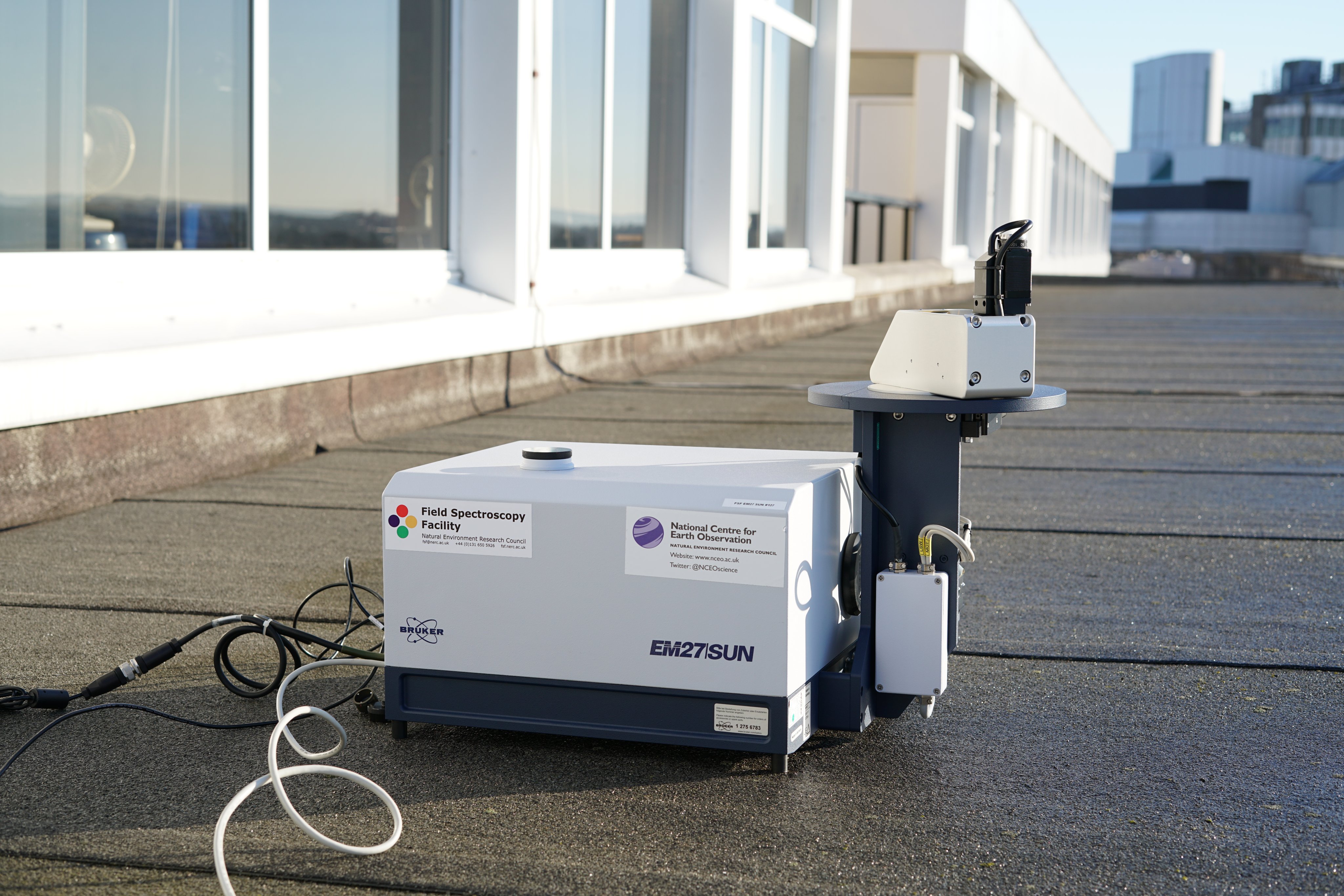 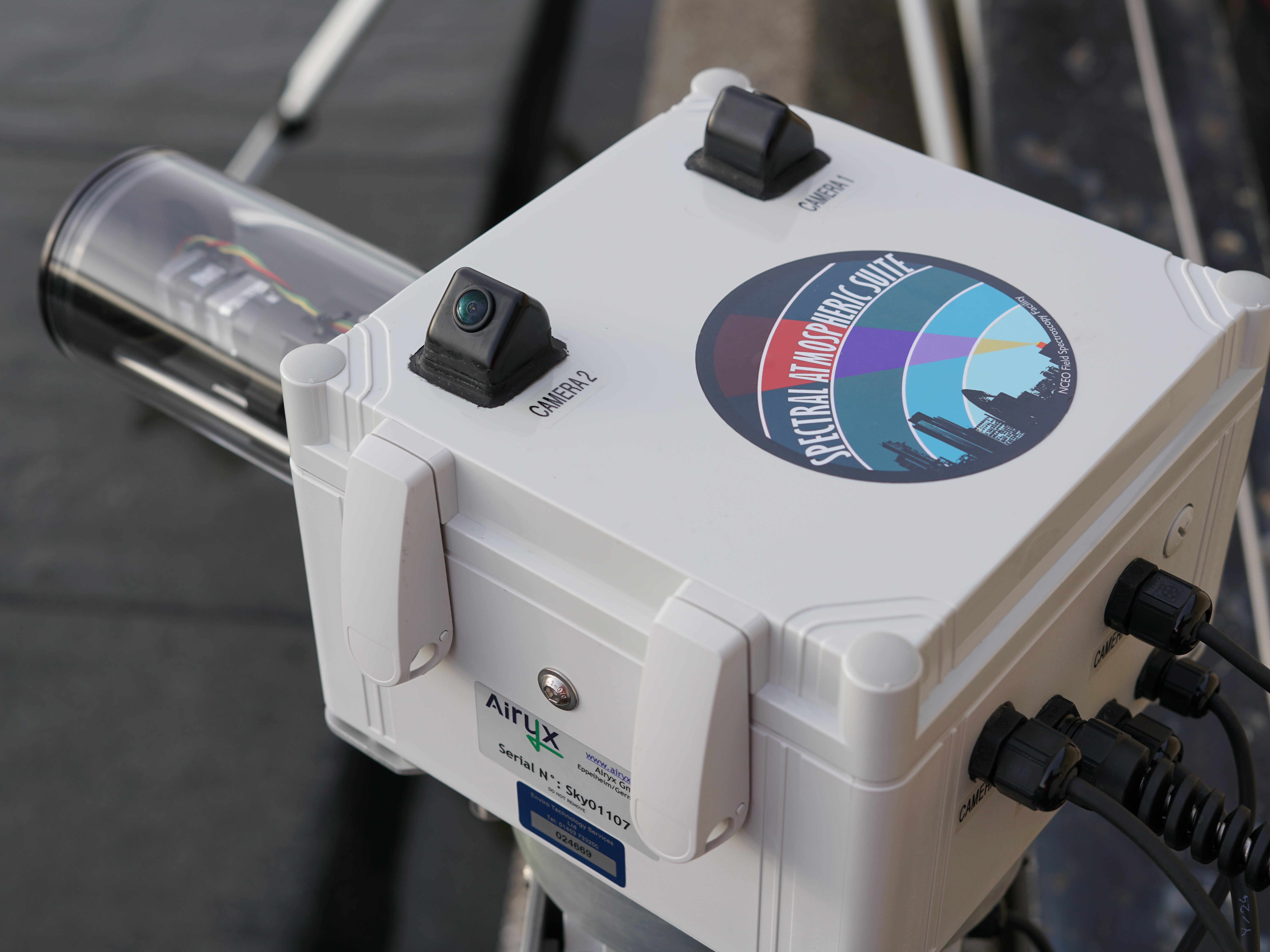 Complimenting these measurements, and allowing for comparison between ground-based and satellite measurements, is a sun-sky-lunar photometer (the CE318-T from CIMEL Electronic), which provides measurements of aerosol optical depth. Finally, each node also has an autonomous weather station (the WXT5360 from Vaisala) providing meteorological measurements necessary for the processing of acquired data. 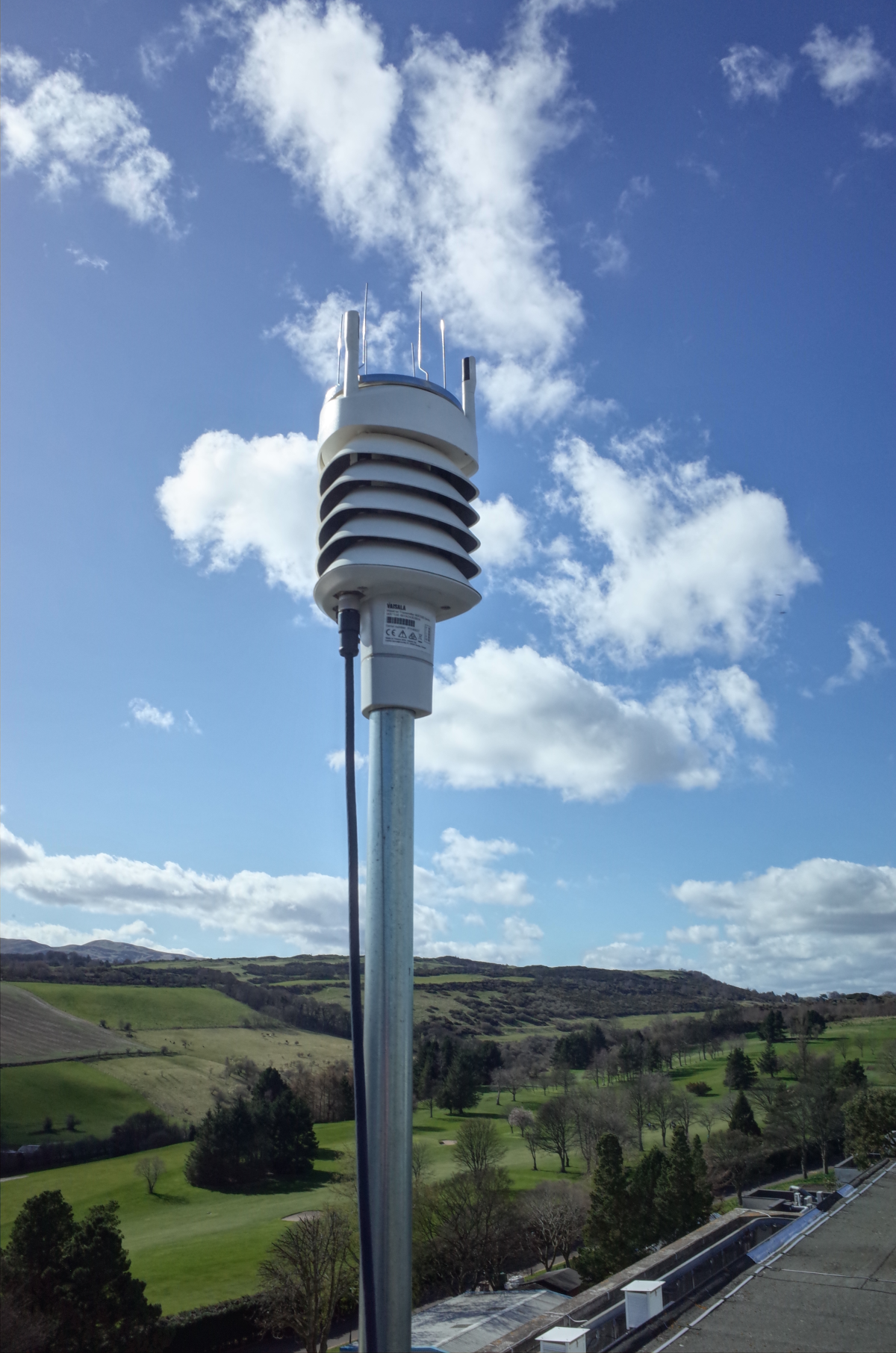 The power of the Spectral Atmospheric Suite lies not just in the high quality instruments in each node - making it as powerful as a miniature "supersite" for atmospheric measurements - but also in its portability and autonomous nature. Nodes can be swiftly deployed for long periods of time without human oversight, with little power draw and in areas where traditional networks have not been able to reach. This makes the Spectral Atmospheric Suite ideal for both urban areas, where the ability to swiftly and easily move around nodes lends itself to urban "hotspot" measurements, but also remote areas - such as wetlands - where infrastructure deployment can be a concern.

After extensive testing of instruments and setup at the NERC Field Spectroscopy Facility's base in Edinburgh, nodes were deployed across London in April 2021 as part of the University of Leicester's involvement in DARE-UK (Detection and Attribution of Regional greenhouse gas Emissions in the UK) project. Sites in London form a SE-NW transect across the city, allowing measurements across the prevailing wind direction of the city, and access to sites has been generously provided by the National Physics Laboratory, the University College London, and the Havering Local Authority. 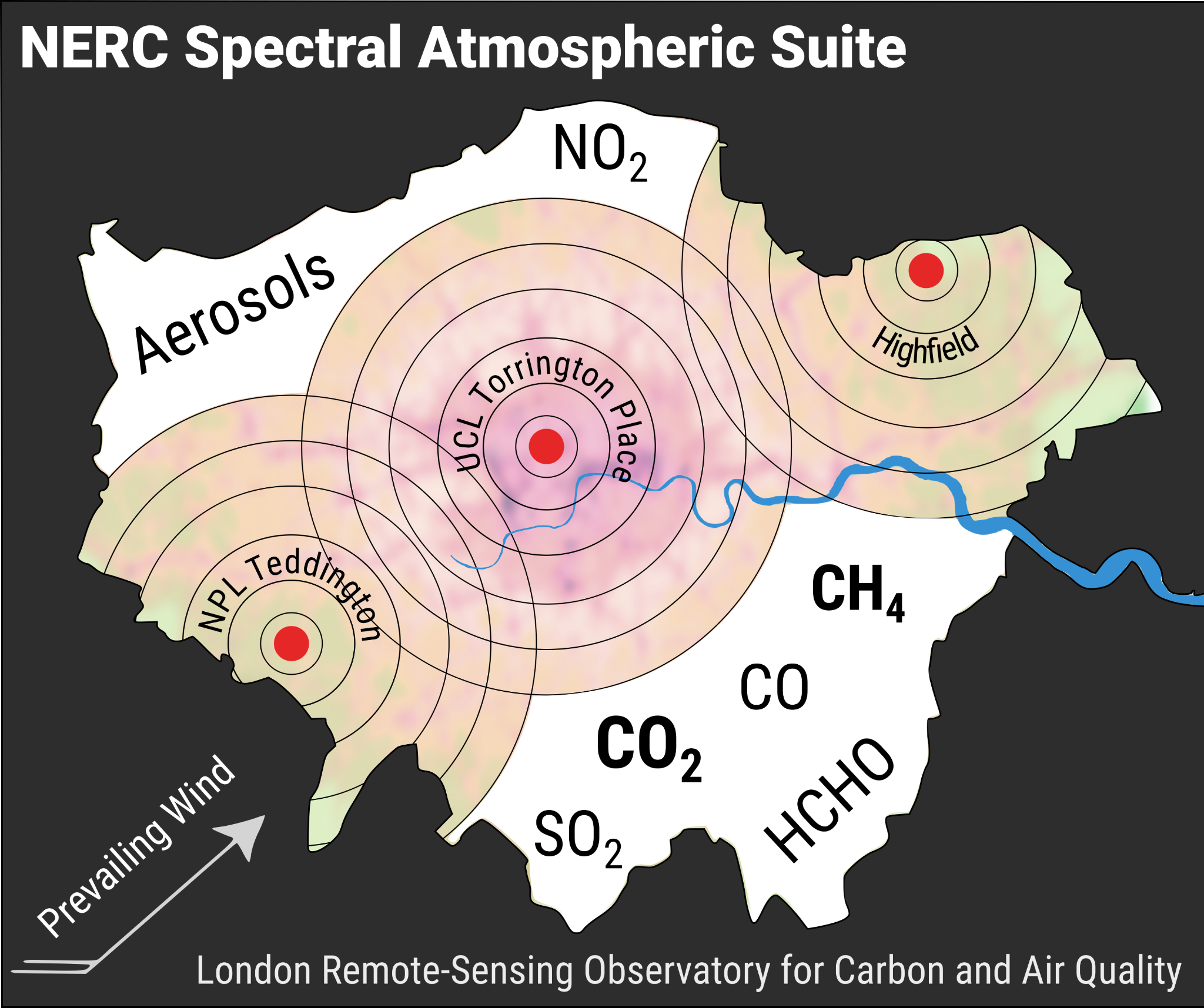 Site Locations in London as Part of SAS

The campaign, entitled the "London Remote Sensing Observatory for Carbon and Air Quality", has now been operational for six months acquiring a wealth of high quality data for Leicester and DARE-UK's research goals. 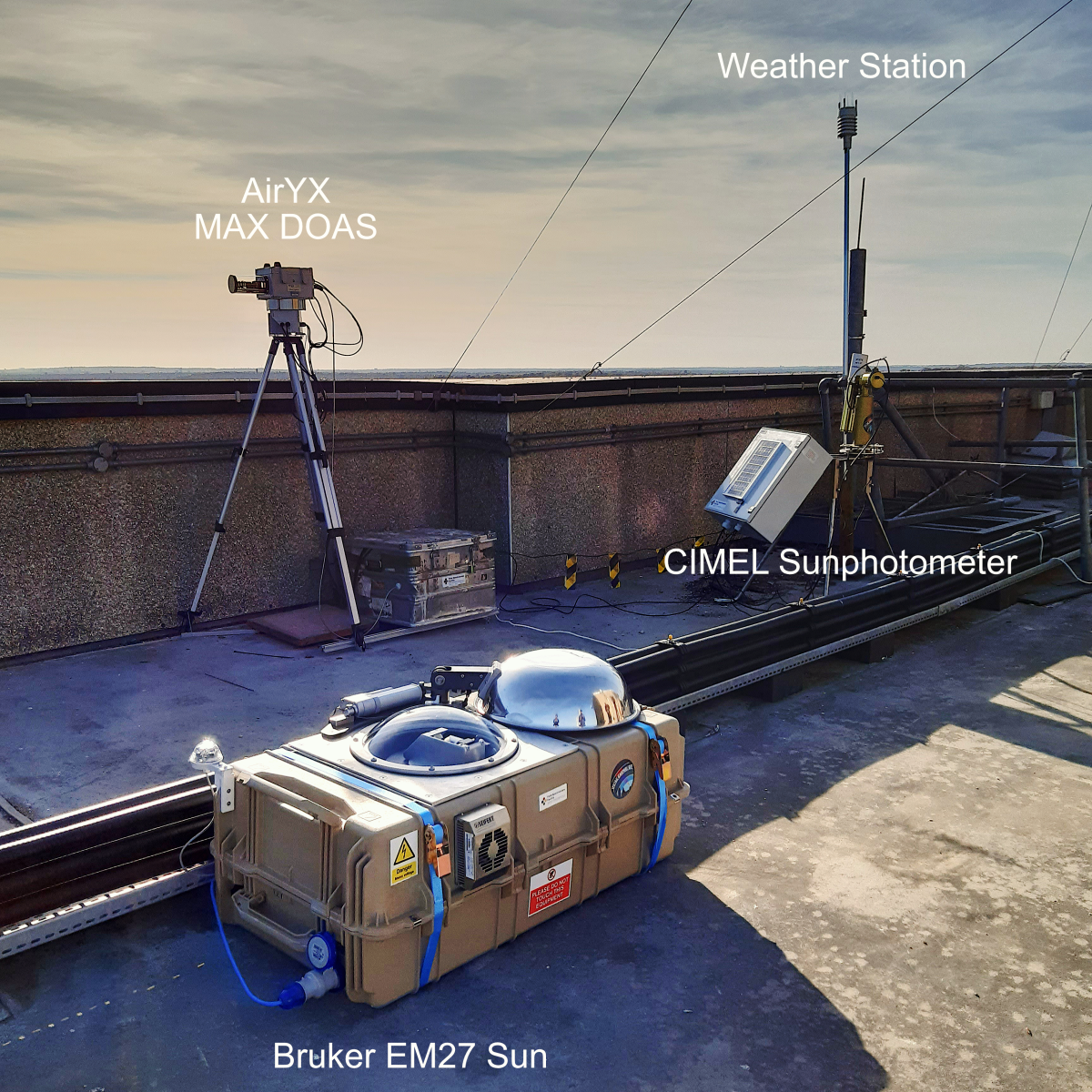 The Future -- the Spectral Amtospheric Suite on loan from FSF

The current campaign for the Spectral Atmospheric Suite is due to end in 2023, after which, applications can be made to the Field Spectroscopy Facility for the use of one or more of these powerful miniature "supersite" nodes for use in air quality measurements.